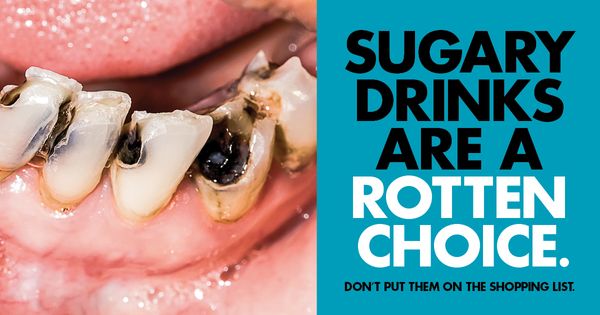 Cancer Council Western Australia and the Australian Dental Association of WA (ADAWA) have united to call for tougher restrictions on the sale and promotion of sugary drinks to children, urging sugary drinks to be removed from public venues that children frequent such as sporting and health facilities, and banning junk food advertising on public transport and billboards.

It comes as the two organisations launch a new LiveLighter campaign titled ‘Sugary Drinks are a Rotten Choice’ that features graphic depictions of rotten teeth. The campaign aims to raise awareness of the huge impact of sugary drink consumption on dental health, and hopes to give West Australians yet another reason to ditch the sweet drinks.

ADAWA Chief Executive Officer Dr David Hallett said that tooth decay is the most common chronic disease in Australian adults and children[1], and restrictions on the promotion and availability of sugary drinks would significantly improve Western Australia’s overall dental health.

“Consumption of added sugars is the main contributor to tooth decay in children, young people and adults,” Dr Hallett said.

“Given nearly half of Australian children have tooth decay[2], it’s clear that we need to do more to raise awareness of how these products are ruining our WA smiles, but also to have an environment that makes healthy choices easier.

“In 2020, with what we know about protecting teeth, we should have eradicated tooth decay. Instead not only is tooth decay common, but our members are reporting that these cases of severe decay are far too frequent.”

“Sugary drinks are the single biggest contributor of added sugar in Australians’ diets[3]. They can lead to weight gain, and we know that being above a healthy weight increases the risk of 13 types of cancer,” Ms Kennington said.

“Many people don’t realise just how much sugar these drinks contain, for example, one 600mL bottle of regular soft drink contains 16 teaspoons of sugar.”

She added that while campaigns like LiveLighter are crucial, public education alone isn’t enough and called for a whole-of-sector response to ensure children and families are supported to make healthier choices and protected from junk food and sugar beverage industry tactics.

“We can’t expect personal choice to triumph when we’re living, working and playing in environments that are saturated with advertising and promotion of cheap unhealthy options at every turn – families need to be supported,” Ms Kennington said.

“Given this health crisis is largely fuelled by the fast food industry globally, it’s unfathomable that even public buses that take our kids to school are completely covered in sugary drink advertisements from major fast food chains.

“We need junk food advertising removed from public transport and outdoor advertising spaces owned by the Government and we want to see sugary drinks removed from sale at hospitals and venues that attract kids, such as junior sport and publicly owned family attractions.”

The new campaign runs for six weeks from Sunday January 19 to coincide with the typical summer slushie and sugary-drink advertising onslaught.