Don’t be fooled by the marketing. The idea that low-carb beer is good for you is nothing more than a myth, designed to make the “weight conscious” drink more beer.

And as far as marketing ploys go, it’s working. Our latest research shows that more than one in three men (35 per cent) and one in five women (22 per cent) incorrectly think low-carb beer is healthy.

But marketing certain beers as ‘low carb’ is doing nothing more than giving these beers a false healthy halo.

Sorry to be the bearer of bad news, but the reality is low-carb beers have only slightly fewer kilojoules than regular beer. They’re not healthy, and drinking them certainly won’t prevent weight gain.

We’ve crunched the numbers with Cancer Council Victoria and found some so-called “low-carb” beers actually contain as many carbs as beers that didn’t carry this message.

Most beers are actually already relatively low in carbohydrates. It’s the alcohol – not carbs – making beer so high in kilojoules.

So what’s actually in beer?

On average, a typical lager or ale contains 1.4 grams of carbohydrates per 100mL, while “low-carb” Pure Blonde has just over 0.5 grams and “lower-carb” Carlton Dry has 1.9 grams. It’s not much of a difference, in the whole scheme of things, is it?

Around 80 per cent of the kilojoules in a typical beer come from the alcohol itself, while only around 15 per cent come from carbohydrates, and less than 1 per cent from sugar. 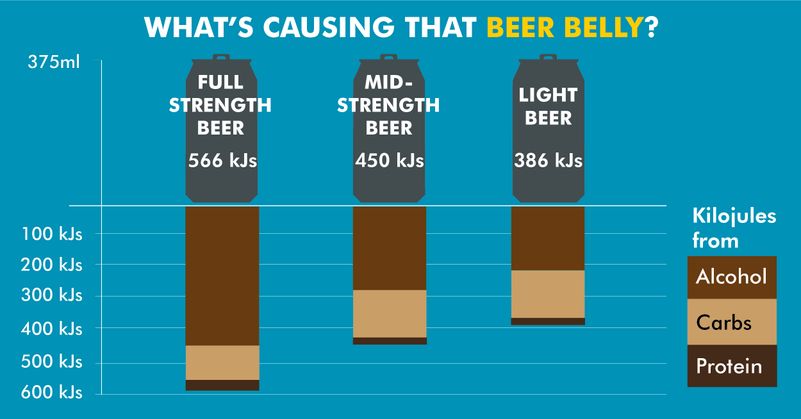 At the end of the day, it’s the alcohol in beer, not the carbohydrates, that does the damage to your waistline and puts you at greater risks of serious health problems, including cancer.

Cancer? Does beer cause cancer?

Yes, all alcohol can lead to cancer – in two ways:

Alcohol doesn’t have to carry nutrition info on the label

It’s not surprising people are confused about the health effects of beer!

Unlike anything else you eat or drink from a packet, alcohol brands aren’t required to disclose kilojoule content and nutrition information on their labels. So consumers are far more likely to be duped into thinking beer is a healthy option by sneaky marketing messages like ‘low carb’.

At LiveLighter, we’re calling on the Federal Government to make nutrition labelling mandatory on all alcohol products, just as it is on other food and beverages. Cancer Council Victoria wants this too.

Our advice for beer drinkers?

If you want to keep off the kilos but still enjoy a brew, choose beer with a lower alcohol content, cut back or skip the booze altogether. Your waistline (and whole body) will thank you for it. For more tips to reduce your drinking check out Alcohol. Think Again.

The more alcohol you drink, the greater your risk of cancer and weight gain and other alcohol-related harms (like injury). So if you do drink, stick to the National Health and Medical Research Council (NHMRC) Guidelines – no more than two standard drinks on any day.

At the end of the day, alcohol of any type is just not healthy.

Exposing the hidden sugar in your diet

5 foods you can stop avoiding

Is fundraising possible without chocolate bars?

Aussies inspired to get healthy, but life getting in the way New data reveals our healthy and not-so healthy habits